The 8-point Maltese Cross is the international symbol of the fire service's willingness to make great sacrifices in order to protect others from the ravages of fire. It is a badge of courage and honor and its story is one hundred years old.

This honored symbol originated with a group of eleventh century knights who were serving in a Jerusalem hospital. They became known as the Order of Knights Hospitaller and later became the Knights of St. John. This charitable organization cared for the ill with great compassion.

Later they assisted the Knights of Crusaders in their effort to win back the Holy Land. As the Knights of St. John and Knights of Crusaders attacked the city walls, the Saracens first threw glass bombs containing highly flammable liquids and then flaming torches. Many knights were severely burned, some suffering agonizing deaths. Risking horrible death, those knights who were able, struggled desperately to help their burning comrades, beating out the flames and dragging them to safety. In acknowledgment of their heroic deeds of rescuing fellow knights and fighting fires, the cross which they wore was decorated and inscribed. 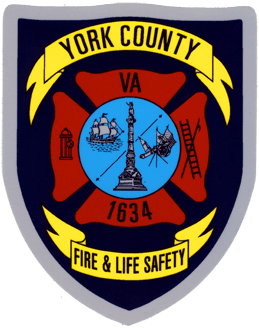 
In 1530, the Island of Malta was given to the courageous knights. The symbol on their flag, the 8-point cross, became known as the "Maltese Cross." The cross, which had originally helped the knights distinguish between friend and foe, became the ultimate symbol of heroism and service. The cross, which is considered sacred, represents the principles of charity, loyalty, chivalry, gallantry, generosity to friend and foe, protection of the weak and dexterity in service.

Today, many fire departments have incorporated the Maltese Cross into their uniform, patch, department seal, or in other ways to symbolize their willingness to risk their lives to save others.
Econ. Development
Visit Yorktown
Pay Your Bill
FAQs
WYCG-TV
Directory
Jobs
[]